European Meetings give members in Europe a chance to connect. They also are a valuable opportunity for North American members to attend and learn from professionals in another part of the world—often the new best practice or upcoming trend originates outside the U.S.!

Peter Johnson, European Group Secretary, created this lovely video montage of past European Meetings. Despite the chaos on this current pandemic and the cancellations and postponements of meetings, we all look forward optimistically to the future and recall some of the lovely moments shared in the past. Click here to enjoy the video. 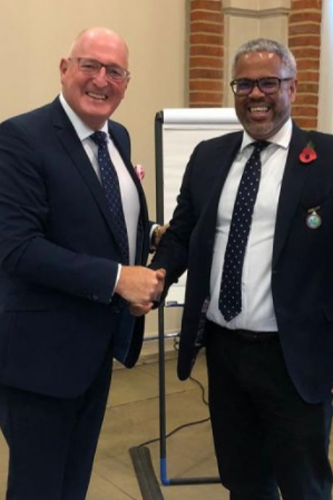 Congratulations to Nick Douch of Douch Family Funeral Directors in Dorset England who has been elected as the new Selected Independent Funeral Homes European Group Chair during the European Group Meeting on November 6-7. Members gathered at the Great Fosters Hotel outside of London. And during the open forum discussed mandatory standardized price lists for all funeral directors in the UK and the lack of enforcement powers. Other topics included:

A special thanks to outgoing Chair, Christian Svanholm of Svanholm Funeral Home in Tronheim, Norway and Peter Johnson who continues on as Group Secretary.

Congratulations to John Weir of Selected member, John Weir Funeral Directors in Rainham, Kent, England. We are delighted to share that John has been named the High Sheriff for the County of Kent. The entire ceremony can by viewed on this video. The role of High Sheriff has been in existence for at least 1,000 years. Originally they were Royal officials appointed to enforce the Kings interests in a County; in particular to collect taxes and enforce law and order. Today, there are 55 High Sheriffs serving the Counties of England and Wales. The office is an independent non-political Royal appointment for a single year. Their duties include attendance at royal visits in the County and provide support for Her Majesty’s High Court Judges; supporting the Crown and the judiciary remains a central element of the role.

Pacific Meetings give members in the Pacific region a chance to connect. They also are a valuable opportunity for North American members to attend and learn from professionals in another part of the world—often the new best practice or upcoming trend originates outside the U.S.!

Pacific Group meetings in Australia and New Zealand are suspended for the time being due to COVID-19 and restriction of travel between individual States and the two countries.