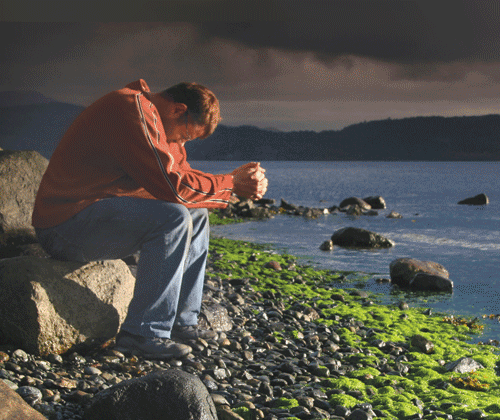 Many people who are bereaved because of suicide find themselves asking "why?" Why suicide? Why now? Why in this way? Why did she not call me? Why couldn't I help him? The fact is, there is no single cause of suicide. Most people who are suicidal can not think of anything other than their intolerable anguish and how to stop it. They may not consider their friends and family as deeply as they would in another state of mind; not because they don't love them, but because their unbearable mental pain crowds out all other thoughts.

Suicide is a traumatic loss. As such, you may feel that everything you thought you knew about the world has been challenged, that your life is now radically different than it was before this death. The path of grief is one of adjusting to this loss, learning how to live your life in a changed world, and finding meaning in the life and death of this person you loved. Know that you can survive this loss.

For most people, the experience of grief after suicide is totally unprecedented; coping with this sort of grief has not been "modeled" for you. A suicide support group can help you learn how others who have gone through a similar experience have coped. Most support groups are free of charge and are usually facilitated either by a professional or by a fellow suicide survivor. You can download a copy of our brochure, How to Find a Grief Support Group. You also may wish to talk with a counselor that specializes in bereavement.

American Association of Suicidology
AAS promotes research, public awareness programs, public education and training for professionals and volunteers. In addition, AAS serves as a national clearinghouse for information on suicide. Their site includes listings of support groups in the United States.

American Foundation for Suicide Prevention
This site offers information on suicide, suicide prevention, and grief after suicide. It includes a listing of suicide survivor support groups across the United States as well as Nova Scotia, Quebec, New Brunswick, Ontario and British Columbia in Canada.

Centre for Suicide Prevention
Affiliated with Canadian Mental Health Association (CMHA), CSP offers training (community workshops and online courses) and has the largest English language library dedicated to the collection and dissemination of suicide prevention, intervention and postvention resources. The site does not address issues related to survivors of suicide but does provide information, such as statistics, that you may find useful.

Dougy Center for Grieving Children
The Dougy Center in Portland, OR provides a safe place for children, teens and their families who are grieving a death to share their experiences. In addition to offering a wide variety of helpful pamphlets and books, their website provides a listing of grief programs for children, teens and families in the United States and Canada.

Honouring Life Network
The Honouring Life Network is a project of the National Aboriginal Health Organization. The site offers culturally relevant information and resources on suicide prevention to help Aboriginal youth and youth workers dealing with suicide, an issue that has reached crisis proportions in some First Nations, Inuit and Metis communities in Canada.

International Association for Suicide Prevention
IASP is a Non-Governmental Organization in official relationship with the World Health Organization concerned with suicide prevention. It includes professionals and volunteers from more than fifty different countries. The link www.iasp.info/postvention.php provides international listings of support services for those bereaved after suicide.

Suicide Awareness Voices of Education
The "Coping with Loss" section of this website provides information on several topics, including grieving and what to tell children.

Suicide Prevention Resource Center
This site has information on suicide, suicide prevention and supporting survivors after a suicide. Although based in the United States, it is intended for a full North American audience. There is an extensive library of free, downloadable resources including publications like After a Suicide: Recommendations for Religious Services and Other Public Memorial Observances.

Survivors of Suicide
This website offers information for survivors of suicide and for those who are helping them heal. This site has optional fee-for-service elements.

After a Suicide: Recommendations for Religious Services and Other Public Memorial Observances (PDF)
from the Suicide Prevention Resource Center

Hope and Healing After Suicide: A practical guide for people who have lost someone to suicide in Ontario. (PDF)
from the Centre for Addiction and Mental Health

Dougy Center (2001) After a Suicide: An Activity Book for Grieving Kids. Portland, OR: Dougy Center.

Fitzgerald, H. (2000). The Grieving Teen: A Guide for Teenagers and Their Friends. New York: Fireside Books.

Linn-Gust, M (2002) Do They Have Bad Days in Heaven? Surviving the Suicide Loss of a Sibling. Albuquerque, NM: Chellehead Books.